Everything you need to know about Asscher cut diamonds

There are many different shapes of diamond used in jewellery and each different shape, or cut as they’re referred to in the industry, has its own history. The Asscher cut is no different, with a story behind its invention, popularity, decline, and recent re-popularisation. Although it’s not currently one of the most common cuts, the Asscher cut's history is rich and had moments of huge popularity.

What is an Asscher cut diamond?

Also known as the square emerald cut, Asscher cut diamonds are roughly square in shape when viewed from above but have cut corners for more light to enter the diamond. They typically have 50 or 58 facets and their ideal length to width ratio is 1 to 1.04. Because of their many facets, high crown, and depth, they can produce outstanding brilliance and create a ‘hall of mirrors’ effect.

What is a Royal Asscher cut diamond?

When was the Asscher cut invented?

The Asscher cut was a staple of art deco jewellery, with its straight lines and brilliance making it perfect for the movement. 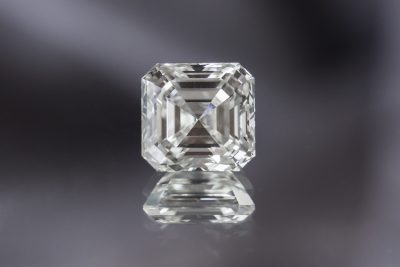 When was the Royal Asscher cut invented?

The full Asscher cut history and the Asscher family

Now that you know the history of this incredible stone, take a look at our collection of GIA certified Asscher cut diamond engagement rings.